How convenient that a day that  should have been devoted to follow-ups of detailed reports of kidnappings, starvation and brutality by Trump's agents against children, we were in instead treated to endless stories about softhearted Donald not wanting to see any Iranians hurt.

Among the latest proven atrocities carried out by ICE and Border Patrol was the kidnapping of a four-month-old baby. When finally returned to her mother the baby did not recognize her and was afraid to go to her. I readily recognize this sort of atrocity as the same thing happened to my grandfather at the end of the Civil War.

When Rodney King was beaten there were 25 law enforcement officers on hand but only one raised any objections to the savagery, leading us to conclude that in Southern California 95% of police officers are savages.

Christopher Browning's outstanding history of Reserve Police Battalion 101,  "Ordinary Men," found that of about 500 German policeman, only one raised even the mildest objections to the murders and other atrocities they were told to commit against Jews and other enemies of the people.

So far as it is known, no one in ICE or the Border Patrol objected in any way to the kidnapping of a four-month-old baby. If they do not have sufficient moral boundaries to draw the line there, history suggests they would not draw it anywhere.
Posted by Harry Eagar at 5:51 PM 91 comments:

Pompeo shoots self in foot

Whatever the object is in the spy film released by the Secretary of State to demonstrate Iranian guilt in the tanker bombing, it isn't a ship-killing mine.

One man handled it without straining, so it cannot have weighed more than 30 pounds or so. 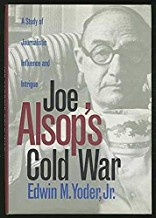 I started reading Joe Alsop's newspaper column in the summer of 1966.  I thought he was an idiot.  He was, too.

I did not then understand how rank the stupidity was or how far back it went. It began in China during World War 2 when Alsop was on the staff of the crackpot aviator Claire Chennault. Chennault's fantasy of defeating an industrial state by random terror bombing was destroyed by infantry attack but Alsop remained a believer to the end of his life.

That 400,000 Chinese peasants were killed in the process did not affect his views.

After the war Alsop made a fine career as a sort of global village idiot specializing on foreign policy and military security.

He claimed often to have invented the domino theory, although Edwin Yoder is skeptical. If he wasn't the father, he was the doting godfather although anyone with a school atlas in the 1950s could have seen that if there was a domino effect, it ran in the opposite direction from the one Alsop and hisRless colorful brother Stewart spent 14 years flogging.

The Red Army stopped in its tracks as soon as it had defeated the fascists of Germany and Japan and never took another goose-step forward, until 1979 in Afghanistan. It even retreated from Finland, Austria, Iran, Korea and Manchuria.

This very obvious fact did not deter Alsop from bleating constantly about the dangers of Soviet imperialism although if any country was sending imperial armies into new territory in the '50s and '60s it was the United States.

People who knew Alsop intimately considered him stupid. It is impossible to argue with this opinion although Yoder, a personal friend, does his best to prettify the sordid scene.

After Chennault, Alsop maintained a lifelong predilection for tough talking fools in military uniform. He was a deeply closeted homosexual, a precious queen clinking his china tea cups and smoothing his custom made Italian silk shirts. Yoder does not speculate about Alsop's attraction to such crude milites gloriosi, but there is a distinct flavor of Tom of Finland here.

The Alsop brothers pretended to be real reporters and claimed always to have at least one previously unreported fact in each of their columns. They made much of their trips to see things for themselves.

However like other men of their time and class -- they were near kin of the Roosevelts and heirs to a Connecticut progressive Republican tradition -- they did not believe that colored people could or should govern themselves, and when they went to a foreign country it would never have occurred to them to speak to anyone who lived there. Their idea of getting the facts was to quiz diplomats, foreign businessmen and others who they believed to be in the know.

As a result they maintained a colonialist mentality.

Joe Alsop was especially smitten by William Westmoreland and was unwaveringly certain that the Republic of South Vietnam was going to prevail despte its complete lack of political legitimacy.

And yet despite their silliness overseas, back home the Alsops worked bravely and effectively, openly and deviously, against McCarthy and McCarthyism . Though not a fan of the somewhat dumpy Dwight Eisenhower -- one the few generals Joe did not admire -- Alsop did tell friends in 1952 that he was afraid that if the Republicans were kept out of the White House for another four years they would turn into a native fascist party.

He was right about that although premature.

Since "Joe Alsop's Cold War"  is subtitled "a study of influence," Yoder tries to assess whether the Alsops really exerted any influence. It is clear that they did in the counterattack of the regular Republicans against the McCarthyites. Yoder is skeptical that they had much impact on their chosen area of foreign relations.

Waiting for the news

So, Trump says we (meaning he) got 'everything we wanted' from Mexico, and he will be annoucing the additional goodies soon. Can we assume that this means Mexico is paying for The Wall?

Wasn't that one of the things he wanted?

Prediction: his besotted adorers will give him a pass on this one, too.

The failure of anti-fascism

A cannonade of blather has been launched over beaches of Normandy today and many salvoes of freedom and democracy light up the sky there. Let's state the obvious: The great antifascist crusade in Europe failed.

To the Russians who did most of the fighting and dying in the supposed antifascist movement, when that wing of the antifascist drive got to the German-speaking , it areas did not distinguish between fascists and antifascists; if you spoke German, you were a fascist.

Though it was fought with ideological weapons, from the perspective of 2019 it is hard to see the war an Europe is anything but a continuation of the struggle for national hegemonies that had been going on for 500 y.ears

For 50 years after the war ,fascism was suppressed except in Iberia and Greece but only suppressed. People who lived in Europe did not reject it. It's more than a little ironic that the place where antifascist political sentiment is strongest today is probably Germany.

The '30s were low, mean decade. The present time is not yet as low or as mean but we're on the same path.
Posted by Harry Eagar at 6:04 AM No comments: