The mistake in the tax bill

It probably isn't a mistake. More likely it's a con job from the rightwing. But for the purpose of elucidation, it doesn't matter, so let's be generous and assume that the Republicans pushing the tax changes are stupid.

Hey, it could happen!

The details in the bill don't matter, only the claim that reducing taxes -- in this case mostly for corporations -- will goose economic growth.

There were many periods in American economic history when that would probably have been true, to some extent. Rightwingers used to fret endlessly about shortage of capital. In the Reagan years, you could not open the Wall Street Journal editorial pages without seeing a piece about how higher government obligations (read, checks to welfare queens) were going to crowd out private investment, since -- unstated assumption alert -- there is only a finite amount of capital in the world

Here, for example, is a sentence from the annual report of BlackRock Advisors LLC:


"However, the capacity for rapid growth is restrained by structural factors, including an aging population in developed countries, low productivity, and excess savings."

(I choose this example merely because my wife invested in a BlackRock bond fund, so we get the annual review; but the same sentiment can be found all over.)

The key words are excess savings. That means that BlackRock Advisors cannot find anythng to do with its money, That's not to say that society couldn't. There are plenty of thngs that could usefully use more capital, but they do not return direct profit, only (with good planning) indirect.

For the first time in history, there is excess capital. I cannot say when this began -- more or less when the dollar valuations of petroleum and gold were was raised off their artificially low levels in the '70s, although these big shakeups may not be explanations.

Over the past 35-40 years, in America (and in the world generally), there has been an enormous accumulation of capital. You didn't get any of it. Them that had, got.

But just because you didn't get it doesn't mean it isn't there. 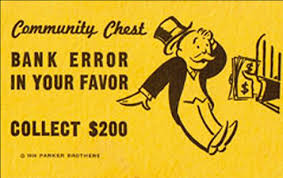 I have not written much about this. I should have.

A number of conclusions follow from this change in circustances.

Another is that a big injection of capital into the active sectors of the economy will not result in faster growth. The most likely result would be to destabilize markets.

Republican policies are, historically, very good at that.