Book Review 399: The Politics of the Prussian Army 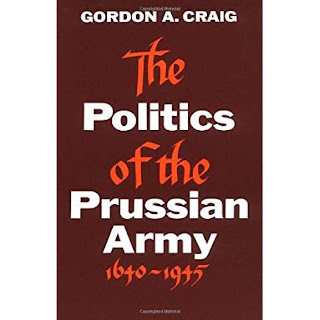 A detailed study of “The Politics of the Prussian Army” might not have seemed to have had any relevance to American politics when it was published 60 years ago, but circumstances change and today we see the United States struggling with the problem that stymied Prussian (later German) liberals for two centuries: How does a polity achieve (or ensure) that the will of the people — as expressed in elections — is supreme?

The Prussians/Germans never did figure it out, although Professor Gordon Craig emphasizes that it was not for lack of trying.

The problem was deeper in Prussia than in other European states since the modern Prussian state was basically the army. It was only when that successful instrument decayed and failed in the face of the French nation in arms that the liberals got their first chance. Then Stein, Scharnhorst, Gneisenau and Boyen reformed the army but were unable to reform the government. (It is interesting that the Nazi state revered Scharnhorst and Gneisenau, not obviously for their liberalism but for their military and nationalist successes.)

From that rather simple time, the situation became far more complex, with the political evolution of the Great General Staff and the interplay among the army, the government and a succession of monarchs who varied widely in abilities and attitude to liberalism.

It was Europe’s misfortune that the more or less liberal-minded kings were weak or died early.

The curious thing about all this is that, except for a period of about 20 years, the army was not effective. The myth of Prussian military prowess was just that —a myth. The generals who limited the state were limited themselves by their small abilities. (It is worth noting that Prussian law limited the army’s manpower to 1% of the population; today, even after 25 years of continual reductions, the American military is just barely getting down to this level.)

Bismarck mastered them, by giving them three-quarters of a loaf, but after he was dismissed no one in the German state was really able to govern. Generals who were raised to the prime minister’s office were no more able to do it than civilians.

The result was another disaster, more complete even than in 1806. No Scharnhorst or Boyen was available, only Groener, an adept schemer but not a statesman. This led to “the kind of political confusion in which Hitler thrived.”

Hitler’s generals were no more capable than those of 1806 or 1914-18, so for the third time in 140 years the Prussian army drew the state to a doom, this time, everyone hopes, a final one.

It is astonishing, and an example of how people who know nothing about strategy are bemused by winning battles (something Clauswitz famously warned against), that the Prussian/German army still retains its aura of ruthless efficiency. In fact, it was thoroughly incompetent.

If this begins to sound familiar to American ears, it should. Incompetent generals, hopeless foreign policy goals: It is the story of America since 1950.
Posted by Harry Eagar at 11:33 AM