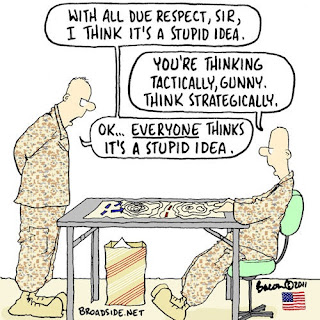 A wise and prudent man who holds a high government position would probably not want to reveal that he is a fanboy of the Lost Cause and an apologist for slavery.

John Kelly was presented, uncritically, as a disciplined, sharp, controlled ex-Marine when he became WBD's chief of staff. A sort of glorified executive secretary or administrative assistant. It turns out, though, that he's just another reactionary ignoramus.

It shouldn't matter greatly, as a chief of staff is not necessarily, or even desirably, a political adviser.

Apparently Kelly is either an adviser or at least, a good water boy, because he decided to become  a controversialist when his boss began his nazi-like attack on the pro football players. I don't recall other presidential chiefs-of-staff ever doing such a thing.

His first comments were mild. Stupid, but mild. He lamented that in the good old days people respected women, life, religion, the military. As readers of RtO know, it is not necessary to respect the military. I have little but disdain, sinking to contempt for the military brass, who have failed to win any wars since 1950 despite consuming a vast amount of resources.

Mild as they were, his remarks sounded silly enough that reporters wondered about them, and Sarah Sanders warned that it would not be a good idea to "debate" a Marine four-star general.

That revealed a lot about Sanders.

Anyhow, Kelly seems to like the limelight and he has since gone on the teevee to reveal even more of his ignorant, backward and -- it turns out -- despicable thinking.

The reality-based community proved ready to debate the Marine four-star.

As would be expected in any war involving a high-ranking United States officer, the other side won.