When he died in 1937, surely no one could have expected that H.P. Lovecraft would be treated to a two-decker biography, like Henry James or Mark Twain. “Nightmare Countries” is not that book (which was “I Am Providence: the Life and Times of H.P. Lovecraft” by the same author).

“Nightmare Countries” is more of a fanbook, coffee table style. Certainly if any author ever did aspire to a two-decker bio, he could not have done better than Lovecraft did.

Possibly the worst case of logorrhea in American letters, Lovecraft wrote an estimated 80,000 letters, many of over 50 pages, in a life that ended at 47. Not bad for a man so socially inept that he could not attend public school or hold a job or even go outside for most of his life. 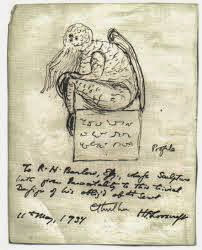 In addition to a messed up life that was turned around by the love of a good woman and the New Deal, Lovecraft’s biography opened up to me part of the underbelly of American popular literature that I had not heard of.

Starting before World War I, Lovecraft was an important figure in a tiny but fascinating movement, the amateur press associations. Apparently as aspect of the striving of immigrants (from overseas or the sticks) who were unsure of themselves in the mainstream, the associations lasted a long time, so they must have fulfilled some need.

These associations -- there were two, and Lovecraft was president of both -- operated much like social media networks today, only using the mails. Their members displayed an attractive humility absent from today’s bloggers and tweeters.

Parallel to the amateur press associations were the unorganized fan networks around the pulp story magazines, like Weird Tales. These were lively societies, occasionally breaking out into personal contacts.

They also produced fanzines, some of which had impressively lengthy runs. Here Lovecraft excelled. From his days in short pants he was editor/publisher of personal magazines. Many well-known writers did the same when they were children, but few lasted more than a few issues. Some of Lovecraft’s continued for decades.

After his marriage failed, Lovecraft got out more and began an extensive series of tours up and down the East Coast. A WASP of traditional prejudices, it is possible that getting out of Providence and seeing how real people lived may have provided the spark that turned him from a reactionary into a socialist.

That and his increasing poverty.

Although read only by hoi polloi during his life and scorned by the likes of Edmund Wilson after his death, Lovecraft now looks to be established as one of the very few writers who will find lots of readers in every generation.
Posted by Harry Eagar at 7:53 PM