It's been nearly a year since RtO found a sound worth mentioning.

I considered "The Show to End All Shows," the most recent production by Circus Contraption, but that hardly counts as a "found sound," and, besides, when looking up the music, I found this.

I remember reading the news accounts of the slaughter in Portland. It was not until now, though, that I learned that two of the murdered were from the Circus Contraption troupe, Joe Albanese and Drew Keriakedes. Just another two sacrifices to our Second Amendment insanity.

Although Circus Contraption was a collective and no one person was credited with its scripts and music (as Keriakedes told me when we discovered Circus Contraption entirely serendipitously in Brooklyn so many years ago), it is clear from comparing Circus Contraption to Keriakedes's earlier music that he was the presiding spirit of at least the musical part of the show. So, in truth, that was the show to end all shows.

I also considered Garfinkel & Oates, the answer to the question: "You know all those black blues tunes where the Anglo-Saxon words are replaced with sly similes like "candy" and "poodle" and "jelly roll." What would you get if a couple of white actresses from L.A. replaced them with the Anglo-Saxon?"

But their music is undistinguished, and, besides, apparently I was the last person to hear about them. 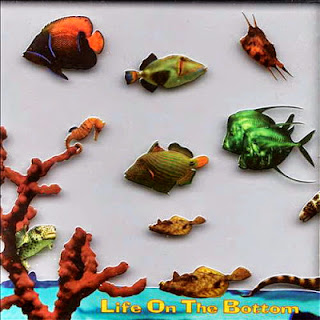 However, I have found The Halibuts, now extinct. It was my best kind of discovery: a dollar album in a junk shop, in the wrong jewel case.

When I popped the CD in the player, iTunes classified it as "Alternative." Uh oh, I just wasted a whole dollar. Fortunately, whoever classifies albums for iTunes is unreliable.

When the first chords of "The Natives Are Restless" came out, I had to check the CD to make sure it wasn't a mislabeled Dick Dale album. Further checking revealed that The Halibuts were based in Boston and made three albums between 1986 and 1996; and that they are -- or were -- part of the retro surf guitar scene.

I didn't know that was even a thing. Why don't those bands play on Maui?

It appears The Halibuts knew Maui, at least by reputation, since one tune is called "Molokini by Moonlight." It also appears that (no surprise) there are people out there who are WAAAY more obsessive than RtO about finding sounds. Such as Mr. Eliminator at the blog Surfadelic. There the review of "Life on the Bottom" reads:


While it would be easy enough to stuff the Halibuts into the retro surf-band file, a quick listen to this shows them to be a top-notch instrumental combo with a propensity for handling a diverse number of styles. While the reverb stun-gun attack of the guitars veers them into retro territory, their takes on Gershwin's "Summertime" and "Istanbul" make them a band with a little more to offer when you've overdosed on every cover version of "Misirlou" there is. [Cub Koda]

I couldn't have said it better. My find, however, was not "Life on the Bottom," though the CD was in a "Life on the Bottom" jewel box. I found "Chumming," an earlier release. Well worth a dollar.
Posted by Harry Eagar at 12:51 PM