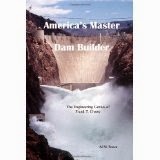 I debated whether to describe “America’s Master Dam Builder” as illiterate or subliterate but eventually decided it is both.

It does no credit to Simpson University, a Bible school, or the Cal State system that Al Rocca is allowed to teach. That he taught (or perhaps still teaches) “education” is a stupid joke. That he won an award as an outstanding editor of a social studies review by some group of yahoos called the “National Council for the Social Studies” (sic, at Rocca’s Amazon page) makes the joke that much stupider.

A pity, because Frank Crowe was an important engineer in the West. As he said, there was only a short time during which all the biggest dams would be built — about two decades — and he intended to build them.

He managed Hoover and Shasta and a number of smaller dams. You would think from “America’s Master Dam Builder” that he virtually licked the challenge of building high dams by himself.

Crowe had three distinguishing characteristics —he used gigantic cableways to allow continuous concrete  pouring on a big scale, he worked through the winter in the northern Rockies when most jobs shut down, and he was a devotee of the “speed-up,” a favorite of bosses in the years of Coolidge “prosperity.”

If workers got killed — more than a hundred did at Hoover — so much the worse for them. Crowe got rich and respected.

His karma was not good. His wife died from the complications of childbirth, and later his son. Conditions were primitive in the West in the early 20th century, especially in the areas where dams were possible. Later another child of his second wife also died. I frame no hypothesis about that, just sayin’.

Rocca, a local historian of northern California, was diligent in the files and had access to Crowe family records. He also interviewed some of the men who worked on Crowe’s projects, nearly 50 years after Crowe had died.

Too bad this rich material did not come into better hands. It is clear that Rocca does not understand engineering, any more than he knows how to write in English.

I think my favorite example — of dozens — was “the water flowed sheepishly,” although “Nervously, the unperturbed engineer . . .” is also good.