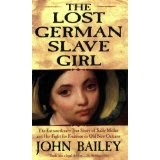 Although it is barely 250 pages, octavo, “The Lost German Slave Girl” manages to be many books in one: a mystery; a courtroom drama; a social history of the displaced peasants of Europe and the conflict between the old settlers of New Orleans and the new American political class; and, above all, a mordant examination of the tricks sophisticated legists were forced into by their decision to defend slavery.

The legal position was simple: By the 1840s, American slavery had determined that a white person could not be a slave. The complicated question was: Was Sally Miller white?

Specifically, was she Salome Muller, the daughter of Bavarian peasants who had emigrated to New Orleans in 1818?

In 1818, Salome was either three years old, or about 10 — a difference that became crucial in her lawsuit. Twenty-five years later, a woman identified as Salome by her godmother was discovered living as a slave in a cheap dive.

John Bailey, an elegant writer, weaves all the threads into a shocking tapestry, starting with something that barely gets a sentence in American history books: the exodus of impoverished rural Europeans in the early 19th century.

Practically the whole village of the Mullers pulled up stakes, and after robbery and suffering that was nearly the equal of what Africans endured on their Middle Passage, sold themselves — those who still lived — into bondage to pay their passage.

Bailey then describes life in the National Period, skillfully referencing decisions of the Southern courts in cases involving slave property. This makes clear that slavery was not, as Ruffin and other apologists claimed, a peculiar institution with deep roots in conservative relations. Jurists, some as sophisticated as any in the western tradition, and legislators were actively remaking slavery in the ’20s, ‘30s and ‘40s. They fully mastered, but rejected, the liberal arguments for liberty.

But, and here is where the example of Sally — or Bridget, or Mary or whoever she was — advances the story beyond the legal wrangles, which other historians have rehearsed. Bailey, an advocate who lives (surprisingly) in Australia, details how the unwritten slave code bore on the maneuvers of the lawyers, the plaintiff and the defendants.

It was not merely a question of fact. It was also an affair of honor. Everyone understood even if no one said anything about it.

Not until the last page does Bailey render his verdict on the facts; I will not spoil his surprise here.

By then, though, the verdict on the big picture is already in, and it is devastating.