Book Review 406:The End of the Imperial Japanese Navy 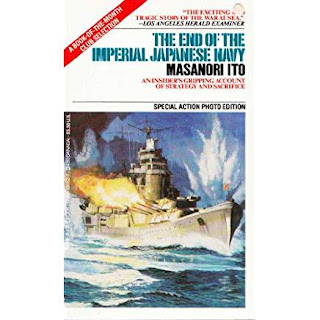 THE END OF THE IMPERIAL JAPANESE NAVY, by Masanori Ito. 192 pages. Macfadden-Bartell paperback

As we wonder what moves China or North Korea might be willing to make on the international stage, it is worth remembering how badly Americans understood what Japan would be willing to do 75 years ago.

The Japanese view of how it unfolded is very different from ours, even if the Japanese thinker agrees with most American historians that Japan had no chance of submitting its national goals to the test of war successfully with the United States and Gret Britin.


“The End of the Imperial Japanese Navy” is an old book, published in the early ‘50s, first as a series of newspaper articles by  highly-placed reporter who had covered naval affairs since the ‘20s.

For the Japanese, god, specifically the War God, was an active agent in warfare. Americans (like MacArthur) might prate about God’s being on their side, but even as psychotic a general as MacArthur did not write god into operational plans. The Japanese navy did.

Even as well-informed a reporter as Ito made some odd mistakes. He got the armament of HMS Prince of Wales incorrect. (Americans fixate on Pearl Harbor, but from the Japanese point of view — specially of a big gun guy like Ito), the sinking of the Prince of Wales was an even greater victory.)

Ito also still fell completely for the claims of the kaiten (suicide submarine) faction, even into the ‘50s. He credits these nasty weapons with major successes. In fact, they scored only a destroyer escort and a tanker. (I have a personal interest in kaiten, since the largest warship one ever attacked was the USS Case at Ulithi. Accounts of that attack vary — either that Case ran down and sank the kaiten or that the kaiten hit the Case but the warhead broke off and sank without exploding. My father was the gunnery officer aboard Case and if the kaiten had succeeded you would not be reading this.)

All military people make mistakes in reporting battle outcomes, usually claiming more destruction than was accomplished, but the Japanese were especially flagrant. In the case of kaiten, the only way they had of assessing results was what the big submarine that launched the little one could see, which was not much. At Ulithi, for example, several kaiten penetrated the atoll. The launch sub saw the results of explosions and concluded that the kaiten must have succeeded in sinking at least a battleship and several aircraft carriers, since the pilots would pick out the most impressive targets and could not fail. In fact, all but one of the explosions were of kaiten running onto the reef.

The antagonism of the headquarters of the imperial army and navy are well-known (and only somewhat more vicious than the antagonism between the US army and navy), but Ito proclaims that at the local level army and navy cooperated wholeheartedly. This is not the way Amercians saw it.
To take an example, although shipping was the main problem of the Japanese war effort, the army and and the navy each grabbed as much for their exclusive use as each could and would not share.

As a result, sometimes precious freighters were sent on empty voyages just because one service or the other would not let the other use its tonnage.

The most interesting section of the book — and one of the longest — is Ito’s defense of Admiral Kurita’s retreat at Leyte Gulf, always presented by American historians as lack of nerve or confusion. Ito, who knew and admired Kurita, has a very different view.

He says Kurita, first, was opposed to useless sacrifice of sailors’ lives if no military purpose was likely to be served; and second, understood that his valuable ships were best used against equally valuable enemy warships, and concluded that the sinking of empty transports — even many of them — would not have justified any substantial risk.

As in the United States in 2017, in Japan in the ‘30s and ‘40s, military officers vastly overrated both their own abilities and the capabilities of their arsenal. And they lied to each other and to their governments.